>It feels like I’ve been flitting between lots of different things all week.  I have a number of projects at the planning stage and, while I wait to be in a position to get stuck into any of them, I fiddle about in a slightly disjointed way. 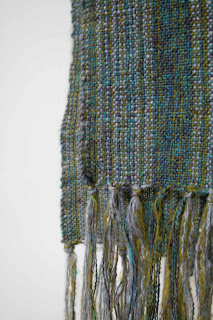 I finished off the warp I’d had on my loom since January, when I wove scarves for late Christmas presents.  I had hoped that there would be enough left to weave one more scarf, but I came to the end sooner than I thought.  It has made a (very) short scarf length.  I was then eager to get another warp on the loom.  I wanted to see how some British wool yarn I have would fare as a warp.  In my impatience I decided to try and make my warp using the old chairs-upside-down-on-on-the-table method. 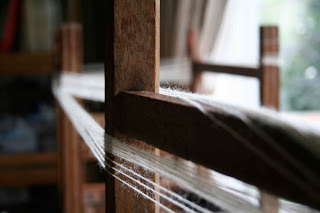 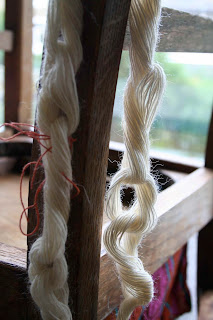 Things didn’t go quite to plan and I regretted my haste.  The warp was a nightmare from here on in and I now know that this wool yarn is not really suited to being a warp, as I had suspected.

I’ve also been fiddling about with some of the leftover bits of printed felt I have from my degree project. 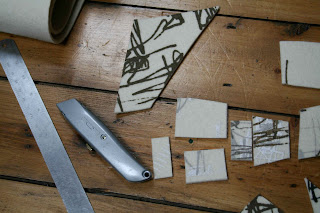 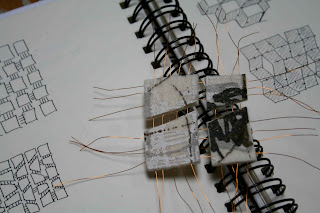 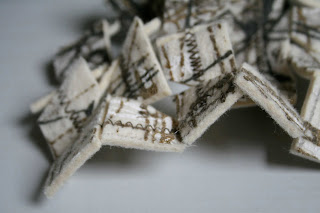 >A couple of weeks ago I visited the British Wool Marketing Board, the home of the Campaign for Wool, who are conveniently based just on the other side of Bradford from me. I wanted some advice on wool felt made from British wool and I was hoping to come away with some contacts for suppliers. The European Business Manager, Richard Poole was really helpful and we had a useful couple of hours discussing various aspects of sourcing products sustainably. I also came away with a lovely bunch of literature about British wool. 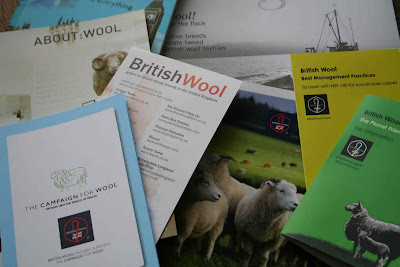 However, I found that my intention to use industrial felt made from British wool is just not realistic. I want to use a natural product, ideally one sourced as locally as possible. Industrial felt has the solidity I’m looking for in both my 3 dimensional experiments and for the basis of the wall based pieces that I’m intending to make as part of my final collection. It became clear within the first few minutes of talking to Richard that what I was after just doesn’t exist. 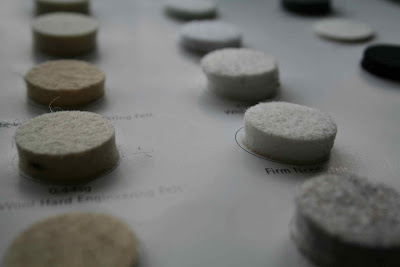 British wool is coarser than wool produced in warmer and sparser climates, even if it is from the same species of sheep. We produce wool with fibres that are generally over 26 microns and often over 30 microns. Industrial felt, which is dense and gives a fairly smooth surface, is made from wool that is finer than this, usually merino, and this comes from Australia or New Zealand. 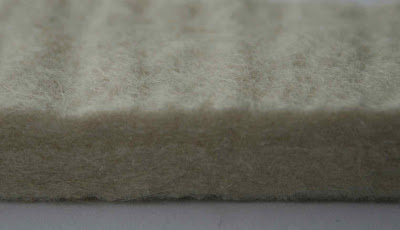 British wool, being generally fairly coarse, is ideal for carpets and for some fashion fabrics. It can be felted by hand and there are plenty of artists in the UK using British wool in this way. I don’t have the time or the inclination to start felting my own wool for this project. I want a ready made product that is solid and firm and thus relates to the solidity of the buildings I’m using as part of my inspiration. British wool is used in various insulation products, some of which I was able to see at the BWMB, but these are very coarse structures which often have recycled plastics included and certainly don’t have the structure, look or feel that I’m after.

So I came away faced with a dilemma:

Do I stick to my principles and acept that I can’t use the type of product I had in mind?
source another fibre from the UK?
think again?
change the whole look and feel of what I want to produce in terms of finished pieces in order to use British wool?
compromise my vision?

Or do I accept that I can’t use British wool for what I want to do and compromise on the sourcing locally idea – a 100% wool material is still a relatively sustainable product even if it has travelled round the globe?