Anyone who has followed my work for a while may remember that I have collaborated on occasion in cross-discipline projects bringing music and visuals together. Fifteen Images was the first of these projects in 2010, which resulted in a kind of graphic score based on colours and textures from a garden, which the performer could use for improvisation (along with defined ‘tonalities’ and a conventional score). This week sees the first performance of a group of works called Fresh Yorkshire Aires. Four different composers/artists have produced graphic scores to be performed by piano duet.

Mapping Yorkshire, with composer Nigel Morgan, takes photographs from four locations in Yorkshire as starting points for our four scores. You can find out more about the scores we produced here. All the Fresh Yorkshire Aires scores are on show in Leeds 14-17th June and the first performance is on Thursday 16th June in the gallery. Later in the month the scores and performance will be in Sheffield. Information and tickets to the performances are available at Fresh Yorkshire Aires.

You can now hear  some of the music that was composed for my Gifts from the Pavement exhibition for Saltaire Arts Trail in May.  Composer Nigel Morgan wrote a series of miniature pieces in response to my prints.  These were performed by the award winning jazz pianist Matt Robinson and a taster of those is now available here.  Matt will be recording an album of these along with other works written for him by Nigel as part of an on-going collaboration.

The Gifts from the Pavement book is now available to buy on my online shop.

By the way, this is the last week to see Industrial Abstract at the Beetroot Tree in Derbyshire.  Textures of Spurn continues at The Bowery in Leeds and if you’re around that area next Saturday I’ll have a stall at the Leeds Festival Chorus Plant and Produce sale at St Chads Parish Centre, Otley Road, Headingley, Leeds from 11.30 – 2.30.  This is a fundraising event for the wonderful choir, which I sing in.  There will be lots of plants, food, craft stalls and general loveliness.

When I was down at the Contemporary Craft Fair in Devon a couple of weeks ago I spent a morning escaping from the intense experience of the show in the relative tranquility of the Devon Guild of Craftsmen‘s gallery, over the road in Bovey Tracey.

I needed a little space away from the thinking and talking that we were so busy with all weekend (I was on a research trip with others from the Saltaire Arts Trail).  The gallery featured an interesting exhibition about engagement with the senses.  I found the work by Marcia Smilack particularly interesting and spent a long time sitting in the booth separated off from the main gallery watching her projected images.

Marcia describes herself as a ‘reflectionist’ and photographs reflections on moving water.  Her images look like they’ve been manipulated but they haven’t.  She experiences synesthesia and I found her descriptions of each image really intriguing as the senses she described were all jumbled up: sound = colour; sight = texture. For someone who doesn’t experience colour in this mulit-sensory way it seems incomprehensible that a sight can trigger a sound and vice versa so I sat for a long time trying to imagine what it must be like.  I find that smells trigger very vivid memories… we all experience things in subtly different ways.

Marcia says she “collaborates with nature” and creates “paintings by camera”.

I found all this particularly interested as just a week before I’d been filming little clips of moving water at Spurn.  I’m not trying to capture the same things that Marcia is but there was enough of a link to make me really spend some time with this work.

This is the image that I enjoyed the most: Cello Music.

You may have noticed that there are new links appearing on the right hand side of the page at the moment.  I’m in a period of starting projects that have been in various stages of planning for some time. 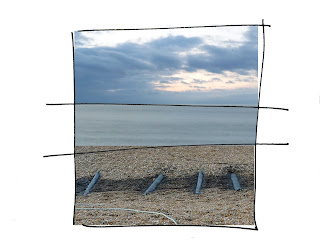 I’ve been involved in the interdisciplinary group Textiles & Music Interact since 2009, when we created and first performed/showed the work Fifteen Images.  We are now developing our third project, Remembering Britten.  We’ve set up the blog to record the development of the project.  This provides a way for the members of the group to share developments as well as forming an archive and information point for anyone interested in finding out about our work and following it. 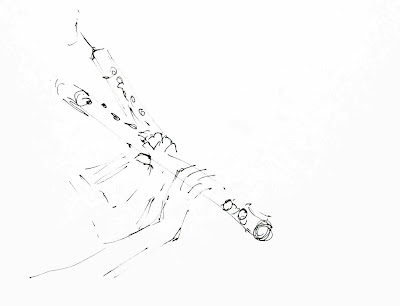 A little while ago I was invited to attend a couple of music workshops to photograph and sketch the participants while they played. I jumped at the chance: an excuse to sit and draw for two or three hours is a valuable one. Of course I shouldn’t need an excuse to draw – it is something I should be doing every day – but somehow it just doesn’t happen that way. If I’m away somewhere I can make that a part of how I experience a different place but at home it is a different story, despite my many resolutions to make it part of my daily routine.

Anyway, I just got round to photographing and cleaning up my sketches. Here are a few of the ones I’m most pleased with, of a string quartet. 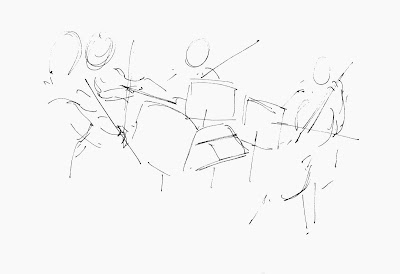 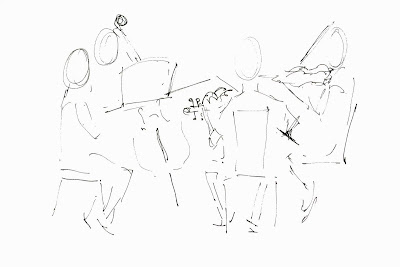 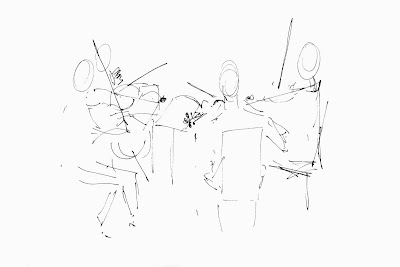 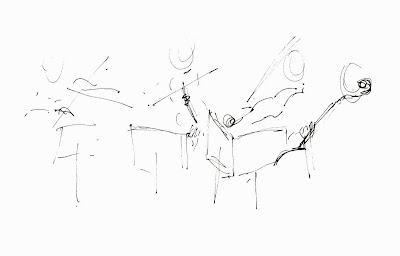 Drawing people is particularly challenging, I find. I just can’t do faces, but I do enjoy trying to capture people (and animals) while they’re moving. The resulting sketches are often quite sparse as they have to be so quick, but somehow I find I can capture something of the moment or the movement without having to get bogged down in too much detail. 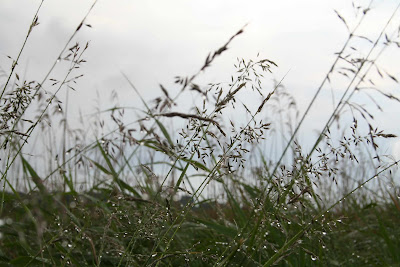 After my final deadline a week or so ago I had a little time away as a bit of a treat. It was a very fleeting visit to Suffolk, but absolutely worth the long drive to get there and packed full of sensory delights.

The main reason for going was to hear this amazing ensemble perform at the Aldeburgh Festival. Not only are this group technically brilliant I love their ethos: they are passionate about playing music in the absolutely best way they can, coming together to work intensively on one piece at a time, performing one piece only and without a conductor. They spoiled the one-work-thing a little by playing an encore (beautifully!) but they obviously feel huge pressure from venues and audiences to conform to the conventions of performance that we have. The courage at takes to perform one work only is similar to that needed to show one work only in an exhibition. This isn’t what people expect – they want as much as they can get for their money, but if it is about quality rather than quantity then the result can be so much more affecting.

It was a very moving performance. This group have to communicate with each other in the way that a quartet would, but there are 35 of them. They know each other’s parts inside out as well as their own. Without the barrier of a conductor standing with their back to the audience the concert felt like such a completely shared experience between players and audience – really something very special. 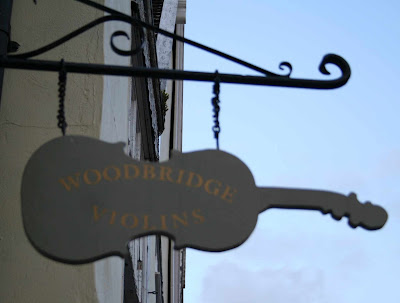 The evening before we stumbled upon this intriguing place, where the instrument workshop is open to the street and all the violin maker’s tools were on view. We peered through the windows at the strange bits and pieces: clamps and planes, partly carved shapes, bottles of varnish – a hive of craftsmanship left for the night. 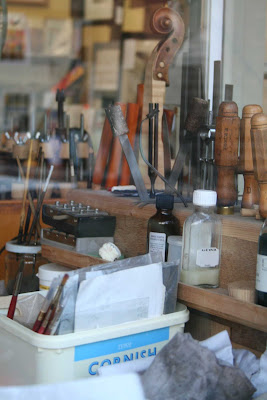 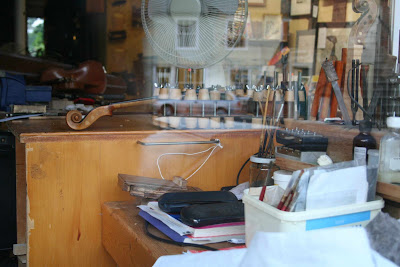 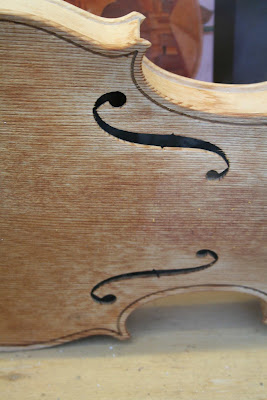 And then there were various other interesting shops to peer into… 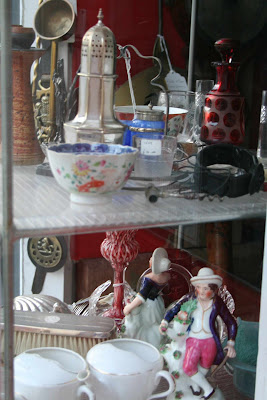 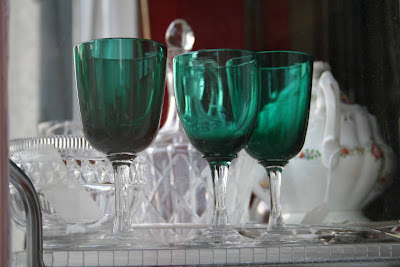 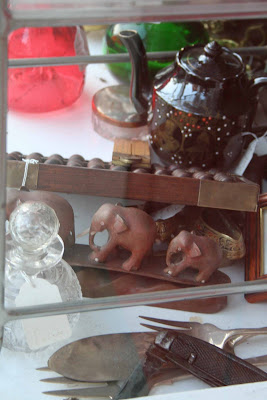 There were reed warblers in the reed bed that Snape concert hall sits next to and that this Family of Man looks out over, warbling away and flitting between the raindrop bejeweled stems. 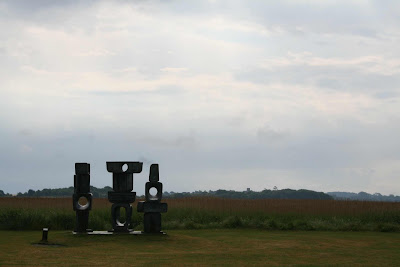 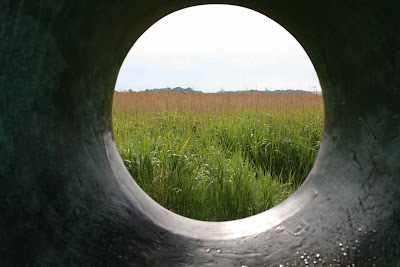 And as for the beach at Aldeburgh, which in many ways was reminiscent of Dungeness (it even has a nuclear power station within view) but not nearly as barren and strange, well there just wasn’t enough time to take it all properly… I’ll just have to go back again. 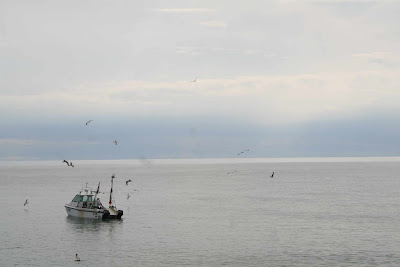