>In a week’s time I’ll be back at college and the next 9 or 10 months will whizz by in a blur. I’ve spent quite a lot of time over the summer sorting things out at home, getting the house straight, clearing and re-arranging. I’ve had some pretty big life changes to deal with over the last few months so it has been important to spend some time getting things in order before term starts.

The start of a new academic year (kids going back to school, new starts) coupled with a change in season (it’s definitely autumn today) tends to get one a bit melancholy… looking back and forwards.

There is a story I often think about and at this time of year, with all the harvesting of things from the garden and making jam and chutney etc, it’s really appropriate. It’s a children’s story, that I had as a child, with simple collaged illustrations called

Frederick is a mouse who lives with his family in a wall on the edge of a meadow. The mice get busy in the autumn collecting grain and nuts and so on to store for the winter. Frederick doesn’t help them and none of the other mice can understand why – they think he’s lazy but he’s actually busy doing his own special work. 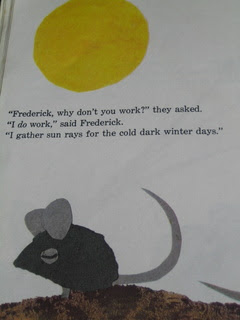 The winter comes and the mice eat the food they had stored and then the food runs out and they’re all sad and cold.

Then Frederick uses his stores, the things he gathered during the summer. 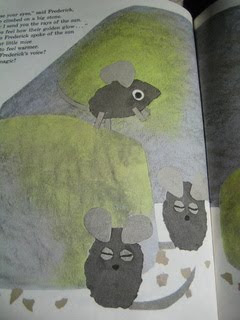 He tells them all about the colours and the sights and smells of summer and their minds are full of beautiful things and the warmth of the sun and poems. And then they’re all happy and they value what Frederick has done. 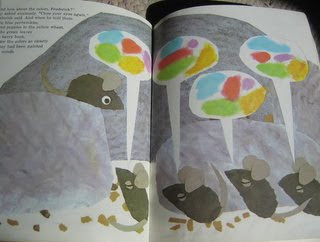 Frederick is an artist who is mis-understood for much of the time. But it is heartening to get to the end and find that his work is really valued eventually.

So when I’m immersed in the colours of the world, taking it all in, enjoying the sights, smells and sounds, committing it all to memory (or sketchbook, or camera) I often think of Frederick and his collecting of colours. 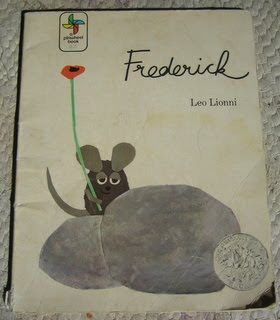 One thought on “>frederick”

This site uses Akismet to reduce spam. Learn how your comment data is processed.